Eats:  Katayef, Aawami, Freekeh, Shorbet Adas, Maamoul, typical pre-meal
Audio: Gorgeous audio recitation of Quran, free via Spotify
Story:  Hanadi Doleh reflects on Ramadan celebrations over the years,and offers us a way to experience some of what moves her at Ramadan.

Her current bio on the Interfaith Center (ICNY) site says it all:

“Hanadi likes to think of herself as the quintessential New Yorker: a hijab-wearing, attitude-toting Brooklynite, born of Muslim parents who immigrated to America for a better life. She has spent her adult life working in and for New York’s Muslim community, and believes in being the change she wants to see. She pursued a Bachelor of Arts degree in Political Science and a Master of Arts in International Relations at CUNY Brooklyn. Her studies informed her understanding of the sociopolitical issues that shape Muslim communities abroad as well as in America, and set her in good stead for the career she chose: social justice activism for Muslim American and other underrepresented communities.”

I first met Hanadi after hearing her speak at a Q Commons event.  Over coffee or lunch several times, she indulged me as I struggled to convey my evolving projects.  I even interviewed her during Ramadan 2017 but I wasn’t happy with the format I had for her stories. Until now, that is. (Culture Capsules!)

Our Culture Capsules typically feature a related playlist for the auditory portion of the multi-sensory adventure.  This time will be slightly different, and probably my favorite offering to date.

During Ramadan, Hanadi’s family tends to listen to the Quran, more than “music” but the thing is, the recitation is sung and it is gorgeous.  If you haven’t listened to the Quran being recited you are in for a treat.  Even if you don’t know what is being said, I think you will feel the powerful peacefulness of it.  Take a second to put it on before you continue reading.

It is the Quran recitation by Sheikh Mishary Rashid Alfasay, available on Spotify, which is free, with ads.  Hanadi said, “It is very much how we have it home.  My mom tends to play it on the iPad and or the TV. ”

You put it on, right?  Beautiful, no?

“My earliest memories of Ramadan start at about the age of 6 or 7.  It wasn’t until I was 8 that I started fasting, though.

We were religious at home but it wasn’t forced.  I went to public school until 5th grade then I switched to a private Islamic school.  We always went to weekend school, as well.  Even before fasting, we were immersed in the traditions by making little decorations like lanterns (note: instructions at the end of this post) or drawing out God’s 99 attributes.

Food makes up a big part of what I remember; the feasting really marked it for me.  Well, food and people. During Ramadan, people come together on a daily basis.  As my family grew older we spread out some and we gathered at someone’s home, mainly on the weekends. This year, the first Saturday is at my parent’s home.  Between my siblings and I, we choose a date and invite the entire family over.  Sometimes we have BBQ’s or potlucks, but it’s about breaking bread together.

We break our fast (iftar) by eating a date and drinking water, then we have our meal and then an abundance of sweets.  As far as divulging in sweets during Ramadan, from a young age, I have strong memories of katayef, which is like a crepe, but thicker, and ends up looking like a half moon when it is stuffed with a sweet cheese or a nut mixture, and then is baked or fried (which I think is best) and served with simple syrup on top.  My mom also always made aawami (also known as zeppolis).

There is often soup and juice to help subside the hunger in the stomach.  For soup, it’s often Shorbet Abas (lentil soup) or Freekeh (cracked wheat soup).

Tamar Hindi (a tamarind drink)  is a staple in many homes during Ramadan. It is a a sweet refreshing drink that is made from the tamarind fruit.  But my family’s tradition – as American as this may be – is Tang! It has been a staple in Ramadan for us.

In preparation for Eid, we make sweets from leftover dates as fillings inside cookies. The cookies take on cool shapes and are then baked and served covered in powdered sugar. These cookies are called maamoul.  Also note the cookie mold, which are staples in my house.

And of course there is the pre-meal, which in 2017 was before dawn at 3:47am.  Before this time you can have a full meal but then the call to prayer is at 3:47am, after which there is no more food until the iftar at sundown.

Pre-meal dishes in my house used to be an array of breakfast foods like boiled eggs, tomatoes, cucumbers, hummus and sometimes french fries.

This year, on the first day of Ramadan we broke our fast at my parents. My nieces dressed in their prayer clothes and led the prayer amongst themselves.  These days, there is much joy in watching them doing the things I would do, but in their own way: decorating the house with lights (like Christmas lights but with stars/crescents or lanterns).  I enjoyed the decorations so much I eventually bought some for my own place!

On Eid, we go to the mosque in the morning for prayer.  It’s mandatory, and there is a special type of prayer, and a short sermon.  Gifts are given to the children and depending on traditional background, money is given to the women and children.  In my family the children exchange toys and spend the day with one another.”

How would you explain Ramadan to young children?

“Explaining Ramadan to children (Muslim or not) isn’t hard.  I have nieces ranging in ages from 3-14, so I’ve been fielding evolving questions for many years.   The kids ask, ‘Why… why… why…?  …why does Ramadan go on for so long?’ …. and so on.  To help them understand, we explain what the world is really like for people who are less fortunate than we are. Often times, we suggest children fast half days on the weekends so they can have the experience. I have found that young Muslim children are eager to fast and try. I think it is so beautiful that they want to partake in Ramadan when they don’t have to.

We also teach them that there are many reasons to fast like cleansing the body and bodily needs/wants and how the physical practice of fasting can bring spiritual development.”

What do you say to people who look at fasting for 30 days as very daunting and physically difficult?

“Yes, it is physically hard in the beginning, and depending on where you are in the world, it can be even more difficult because of the daylight timings.  For example 2017 for those of us in NY was a little but under 17 hours of fasting between dawn and sunset.  And life continues on those days: get to work at 8am, home by 6:30pm.  It is very hard first few days; there is a physical toll as the body acclimates.  I tend to get migraines due to lack of caffeine, and I’ll say that as I get older it seems harder.

But then as the days go on it gets easier. Certainly by the end of Ramadan – we can sit back and look at the accomplishment of surviving such a hard thing and see that it brings happiness.   I find it to be an opportunity to make the most of my relationship with God and dig into my strength as an individual.   It builds character and I become a better person.  It yields so much spiritually and revitalizes my soul.

Beyond the physical, it yields so much spiritually. It revitalizes the soul. Fasting cleanse your body physically and mentally. It’s like a manual reset button. We do it all in the name of our Creator and continue to take on this challenge of life and do what we can for the best possible outcome.”

What do you wish non-Muslims better understood about Ramadan?

“Nowadays, there’s a meme that makes me laugh: ‘You can’t even drink water?’ . Fasting for Muslims is different than fasting in other religions and traditions.  So no: not even water!  We must refrain from all food and drink from dawn to dusk.

It takes strength and perseverance to fast like we do.

But probably most importantly I’d like to point out that practicing Muslims are so happy during Ramadan; it’s not at all about being deprived and somber, which many people assume, but it’s a challenge and the opportunity to build a better relationship with your Creator.

When the month of Ramadan begins, Muslims enter into a period of discipline and worship, fasting during the day, and praying throughout the day and night. During Ramadan, special evening prayers are conducted during which long portions of the Quran are recited. These special prayers are known as taraweeh.

The prayer can be very long. During the prayer, long sections of the Quran are read. The Quran is divided into equal parts for the purpose of reading sections of equal length during each of the nights of Ramadan. Consequently, 1/30 of the Quran is read on consecutive evenings so that by the end of the month the entire Quran has been completed.

Charity plays an important role in the life of Muslims and Ramadan is the time of year that we tend to give the most. It is an opportunity to, based upon our intentions of multiplying the reward of giving charity.”

Below are some recipes for some of the foods noted in Hanadi’s Ramadan reflection above:

Get in the spirit and make (or buy) some lantern decorations, like the ones pictured at the top of this post!  As you can see, by our 5 year old cutting one of the ones in the photo above, making them is easy!

Or just head over to the Amal Design shop on Etsy, which has beautiful, printable Ramadan and Eid decorations. Check it out! 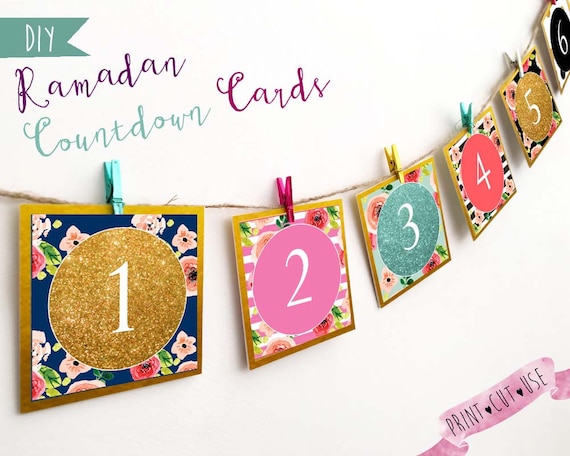